Which login do I have to use with SWITCHdrive?

You need a SWITCH edu-ID account. You can create one with your AAI-Login at https://cloud-id.switch.ch.

Enter one of the valid e-mail addresses stored in your SWITCH edu-ID account and fill in the captcha. Click on "Proceed" and an e-mail with a link that contains a token is sent to you. Click on the link and enter the new password.

Because of SPAM filters it may take a few minutes until you receive the e-mail.

If you do not receive the e-mail within 10 minutes, please also check your SPAM folder.

With this account it is also possible to use WebDAV and future cloud services, which would not be the case if an AAI-Login is used.

I created a SWITCH edu-ID. Do I have now also a SWITCHdrive account?

If your linked institution has subscribed to SWITCHdrive, click on the blue button "Register for SWITCHdrive": 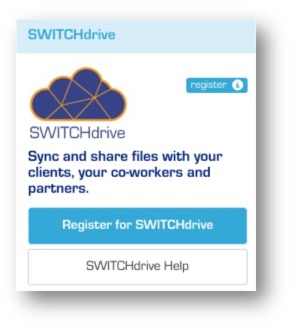 If you are not able to add a home institution or if your linked institution has not subscribed to SWITCHdrive, you need to contact drive-support@switch.ch and ask for a "SWITCHdrive Voucher": 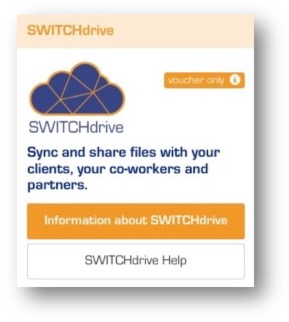 Please note: You have to login at least once to your SWITCHdrive account so other SWITCHdrive users are able to search for your name and to share data with you. Click on the green button "Go to SWITCHdrive" or open a new web browser and type in the web address https://drive.switch.ch. 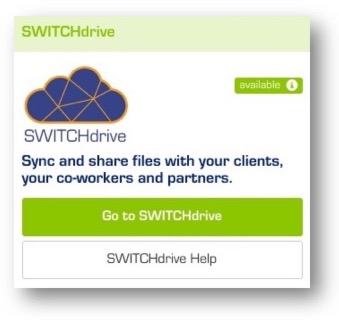 I followed the instructions but still cannot login. What's wrong?

In most cases, you may just have missed the last step in the onboarding process, which is the registration for this service. If you see the error message that the login has failed, just click the blue link in the error message to register SWITCHdrive. Then try again to login. If this still fails, get in contact with the SWITCHdrive support.

Click here for a detailed description how to register SWITCHdrive.

Can you give me a SWITCHdrive voucher for someone who has no SWITCHdrive?

Please refer to this page to see if your institution allows SWITCHdrive vouchers and how to request them. You can also ask to delete a SWTICHrive voucher if the external partner does not need to access the data on SWITCHdrive any more.

I have received a SWITCHdrive Voucher. What should I do now?

Congratulations! With a SWITCHdrive Voucher you are allowed to become a full member of SWITCHdrive, the academic Sync & Share service for Swiss universities and institutions of higher education.

Click this link for a detailed instruction how to create a SWITCH edu-ID. Because you have received a SWITCHdrive Voucher, you probably do not have an AAI account, so click on the link "manual registration page" and fill out the following forms to create a new SWITCH edu-ID. 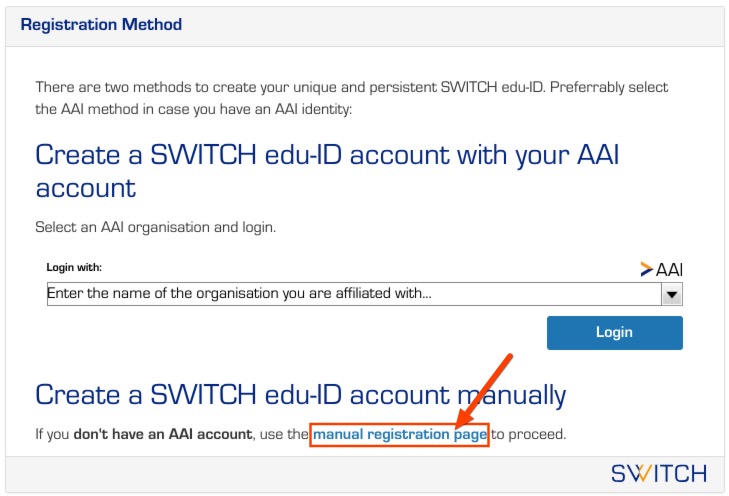 Note: the primary email address will be used in SWITCHdrive to send you activity messages and other important information if you have set some switchdrive settings accordingly. You can change these settings at any time in your personal switchdrive configuration. 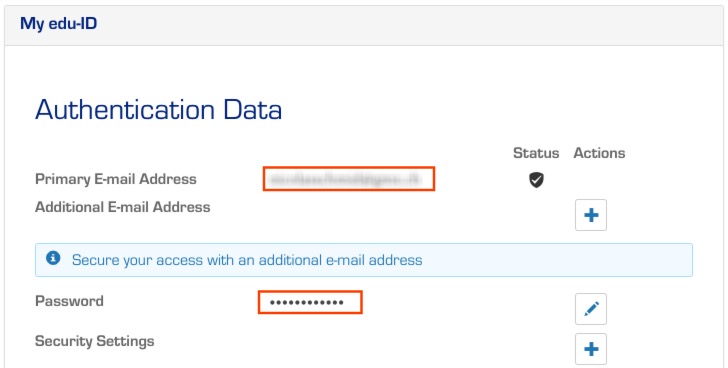 Click now on the SWITCHdrive Voucher link and accept the Terms and Conditions of SWITCH if you agree to them. Then click on the blue button "Registation for SWITCHdrive".

That's it, your SWITCHdrive account is now set up and ready to go. Login to https://drive.switch.ch in a new browser window or click on the green "Go to SWITCHdrive" button on the displayed web page: 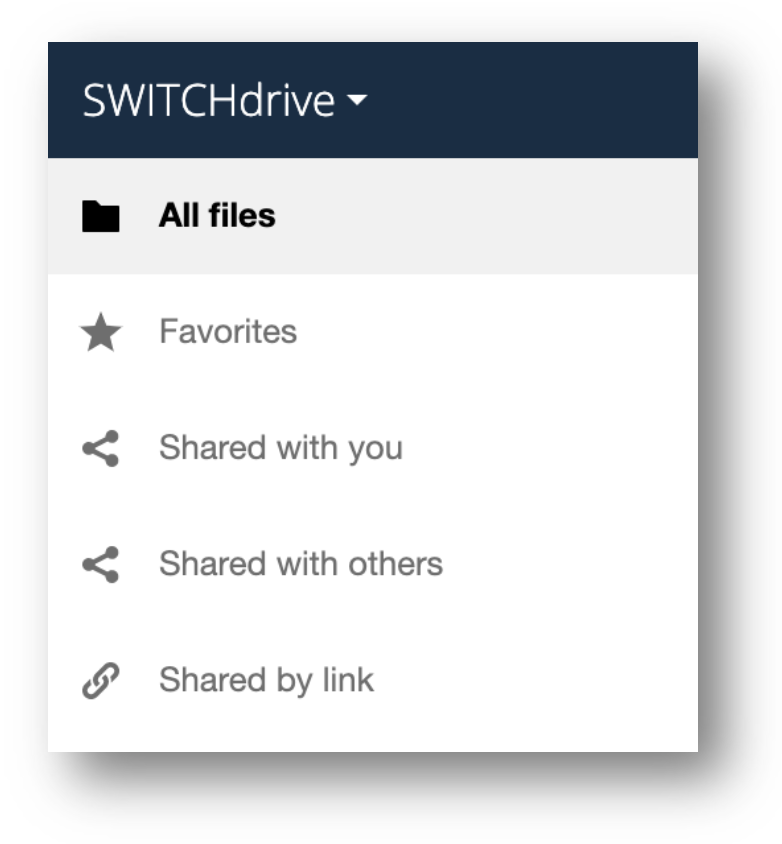 2: Click on "Shared with you" and decline all shares that you have received from other users

3: Click on "Shared with others" and remove all the shares that you have given to other persons (Maybe you should inform your users beforehand that the shares will disappear so they could create a local copy of your shared data if needed)

4. Click on "All files" and bulk mark all of them. Then click on the delete icon to move them to the folder "Deleted files"

I get a message that my account has been deactivated. What's wrong?

Your data on SWTICHdrive is still available and all shares that you have received from other SWITCHdrive users are still valid. You can simply send an email to the SWITCHdrive support team and request to reactivate your account. Usually you will receive a fast response and are allowed to login to your SWITCHdrive account again.

Please check if all your data is fully accessible. If you have data shared with other users you may need to be share them again. It's maybe a good chance to review all your shares to other users and carefully decide if they still need your data, as you have not touched your data for more than one year.

To avoid this deactivation-message, just login to your SWITCHdrive account at least once per year, either by Web-Client (see htttps://drive.switch.ch) or by Sync-Client, which keeps your files automatically synchronised by running in the background.

Please note: If you do not react to this message within 3 months then your switchdrive account and all its data will be permanently removed and cannot be restored any more.

SWITCHdrive does not work any more. What shall I do?

1. Are you able to login to your SWITCHdrive account via web-client?
If not, then check your web-connection and the current status of SWITCHdrive.

2. Is your SWITCHdrive sync-client installed and running?
You should have a small switchdrive cloud icon (

) in the menu-bar (Mac) or status-bar (Windows).
If there is no such icon, open your application folder and launch the switchdrive sync-client.

3. The switchdrive icon can have several colors indicating its current status:

4. If your switchdrive icon is grey or red over a longer period of time, then get in touch with switchdrive support: Click on https://help.switch.ch/drive/contact/ and fill out the form. 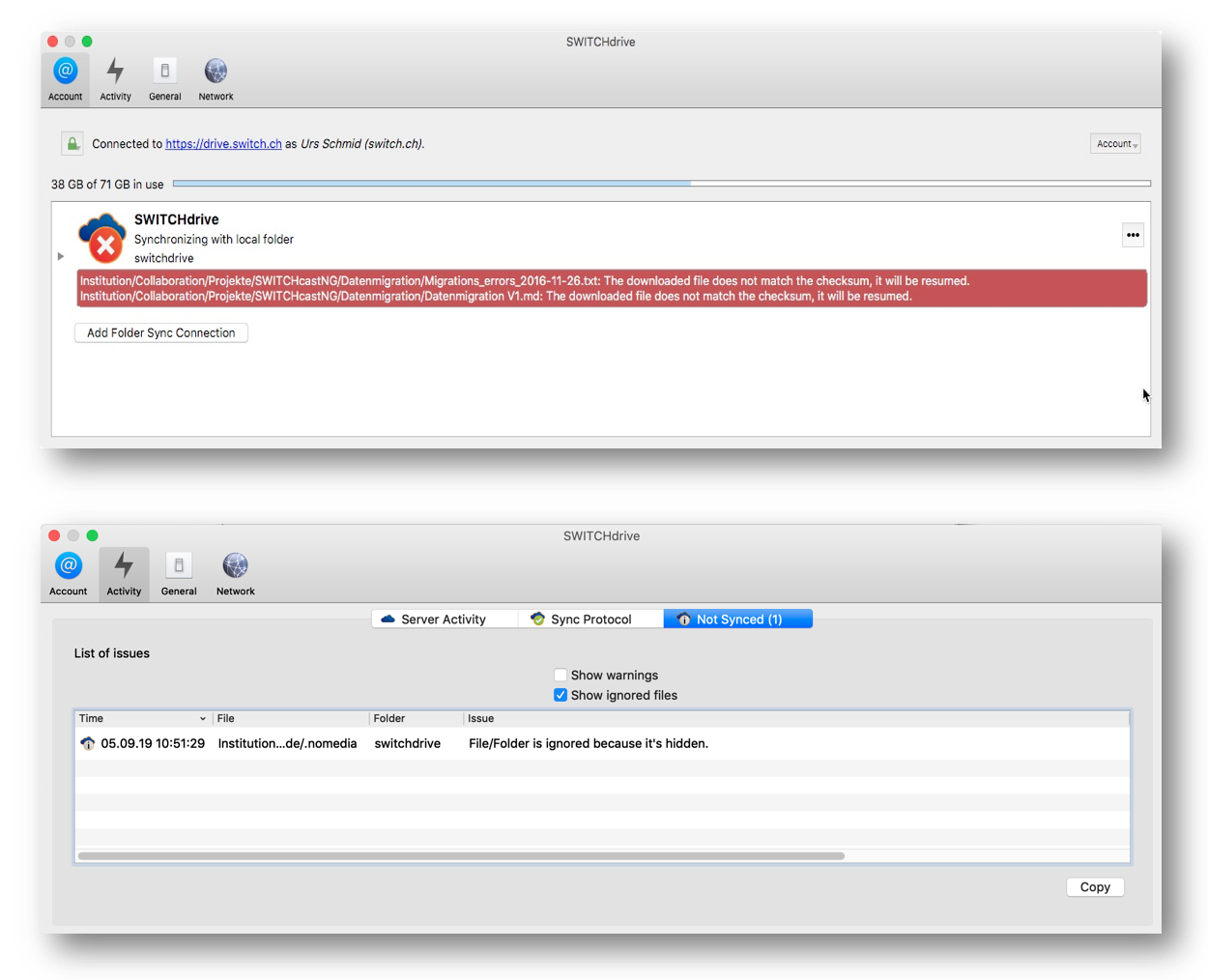 Why is my account disabled when I login via Web-Client? 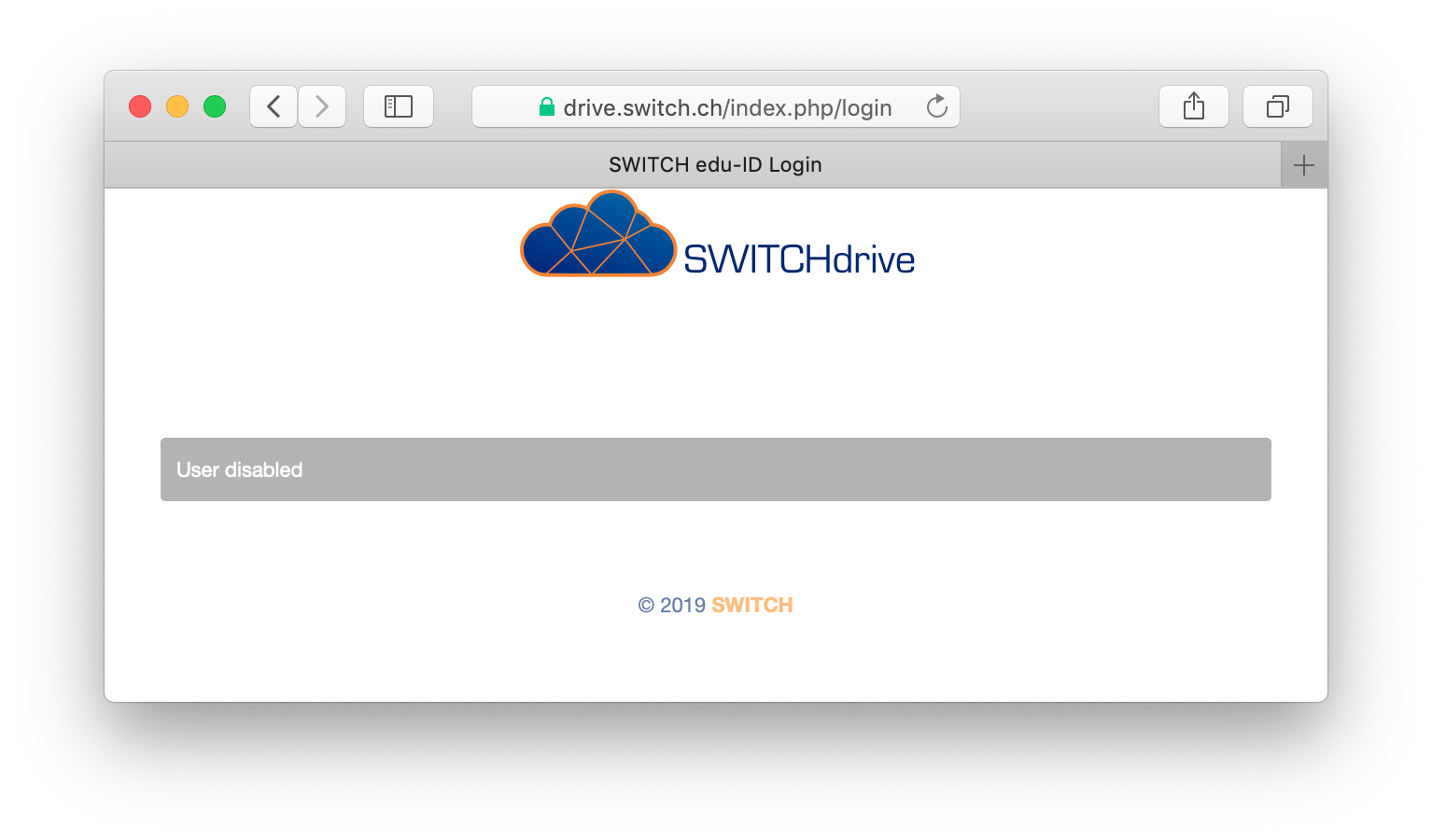 Maybe you have not logged in to your SWITCHdrive account for more than one year or you have lost your affiliation to your home organisation and your account was disabled by a local admin. Or maybe there was a technical issue that caused your account to be disabled for a certain time.

Please note that SWITCHdrive is reserved for members of Swiss universities and other institutions of higher education which have subscribed to this service of SWITCH. If you have recently lost your active affiliation to your home institution you need to add a new affiliation to another institution of higher education in your SWITCH edu-ID account. Check your affiliations by logging into your SWITCH edu-ID account on the following web-page: https://eduid.ch

I am leaving my university soon. What shall I do?

Before you leave your current university, please decline all shares to data that belong to the university or to other users. If applicable, transfer also the ownership of important data in your switchdrive folder to a suitable successor at your former institution. Please make sure that you have also removed all local copies of data that does not  belong to you from all your devices (including mobile devices)!
If you do not start a new study or an employment at another institution that has subscribed to SWITCHdrive, simply logout of your SWITCHdrive account and do not login again. Remove also the SWITCHdrive client from all your devices (computers, tablets and mobile phones).
Once your active affiliation to your former university becomes invalid, the switchdrive administrator at your former institution may block you at anytime from logging into your switchdrive account again.
If you continue your study or your work at another institution, add the new affiliation to your SWITCH edu-ID account as soon as possible. Update also your email-address, because you may soon lose access to this email account. If you have a valid affiliation from another institution that has subscribed to SWITCHdrive, you can continue to use SWITCHdrive without any restriction.
If you have more than one valid affiliation in your SWITCH edu-ID and if you want to change the affiliation that is displayed in your SWITCHdrive web-client please get in touch with drive-support@switch.ch and request a change of your primary affiliation.
If you do not log into your SWITCHdrive account any more, SWITCH will automatically block your account after an inactivity of 1 year since the last login. When your SWITCHdrive account is blocked, all the shares will be removed so your shared data to other users will become inaccessible.
If there are no requests from other users to access any blocked data, SWITCH will delete the SWITCHdrive account after a grace period of 3 months. If we get a request to access some blocked data, SWITCH will carefully investigate together with the corresponding SWITCHdrive administator if access to the blocked data can be granted or not.

I have more than one affiliation to a Swiss university. How can I change it?

If you are a member of more than one organisation, you cannot create multiple SWITCHdrive accounts. You can however change your affiliation which is displayed when you login to your SWITCHdrive account via Web-Client (1). The same affiliation is also shown to other switchdrive users when they want to share something with you and search for your name (2).

If you want to change your affiliation you need to send a support ticket to drive-support@switch.ch and ask to change it. Please make sure that you have indeed multiple affiliations in your SWITCH edu-ID and that your organisation is a member of the switchdrive community.

How can I change my email address that is used in SWITCHdrive?

This email address is also listed in your personal settings (1) and is used for sending all kinds or notifications about actions or activities to you.

The same email address is also used to clearly identify you when other switchdrive users search for your name and want to share data with you (2).

Why do I get an error message about some localhost settings when I try to authorise the Sync Client?

To communicate correctly your own computer needs an internal IP address which is called "localhost". When a communication is established with the localhost, this communication remains internally on your PC and never goes out to the internet. It is also called "loopback" and is used during booting of your system.

If the localhost address is not set, then the communication between the Sync Client and the brower window is not possible and the authorisation of the SWITCHdrive Sync Client fails.

You can check if the localhost is set up correctly when you open a terminal window and type "ping localhost". You can also type "ping switch.ch" for comparison.

The first ping is returned in less then 0.1 msec because it is used internally while the other ping takes more then 7 msec because this ping goes out to the internet.

If the ping returns this error then the localhost is not configured correctly.

The external authorisaton of the SWITCHdrive Sync Client will also fail and you have to edit the "hosts" file on your computer and make sure that it contains the following entries:

# Host Database
#
# localhost is used to configure the loopback interface
# when the system is booting. Do not change this entry.
#
127.0.0.1 localhost
::1 localhost

The hosts file usually only contains some comment lines starting with a "#" followed by two lines with the local IPv4 and IPv6 addresses for localhost.

To edit the hosts file in MacOSX and in Linux PCs:
1. open a terminal window
2. type "more /etc/hosts" and press enter - this will show you the content of the hosts file.
3. if the file does not contain the blue lines, enter sudo nano /etc/hosts and press enter
4. you may need to enter the password of the Computer to start editing the file
5. Press Ctrl-X to quit the editor and to save the changes to the hosts file