Find the answers to common questions and problems with the SWITCHengines service.

If your specific question isn't answered, feel free to contact us by email at engines-support@switch.ch

How to create API Credentials

To use the SWITCHengines API, the OpenStack command line interface (CLI), OpenShift, Ansible, or other tools requiring API access (Rancher, ...), you need to create a SWITCHengines API Credentials.

The SWITCHengines Admin Interface allow you to create/update your API Credentials.

First, you need to login to https://engines.admin.switch.ch/users/profile

Then, select Information on the dropdown menu

After that, select the Credentials tab on the User Info view as shown below. Then click on Issue New API Credentials 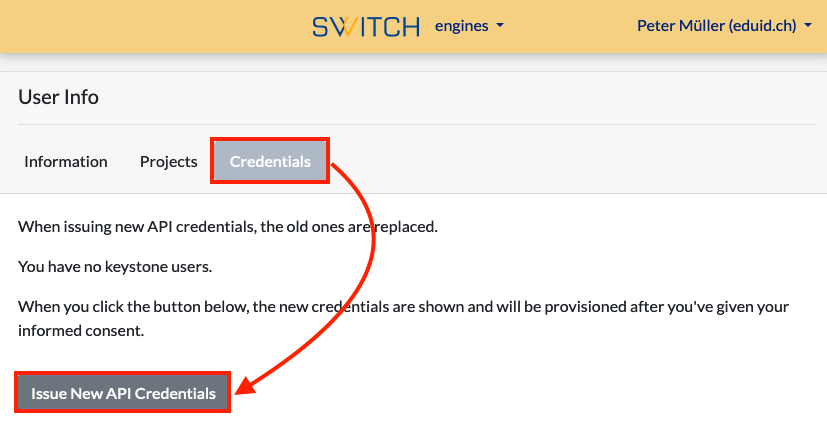 Check the two boxes which allows you to update the password.

IMPORTANT: You will be given a password which will be shown only ONCE. Write it down or store it in a password manager.

Use the SWITCHengines API Credentials

Once you have created the SWITCHengines API credentials, you can use the secret token as a password for your OpenStack credentials (openrc file):

Can I use a CLI to work with the cloud?

Yes, you can use the OpenStack Command Line tools.

Reasons to use the CLI:

See the OpenStack CLI documentation for details on how to install and work with the CLI.

The credentials are found on the Access & Security section in the API Access tab. But first, you need to create a SWITCHengines API Credentials password in order to use the API. The password (e.g. OS_PASSWORD) is NOT your SWITCH edu-ID password, but the secret token you create in the API Credentials.

Be sure to also set a OS_REGION_NAME environment variable with either ZH (for Zurich) or LS (for Lausanne) as a value.

How do I assign a public IP to my virtual machine?

You will need to assign an IP address to your instance

How to get rid of unused public IP addresses?

Here's how you do it.

Why can't I Ping my virtual machine or SSH into it?

Most likely, you forgot to create the necessary firewall rule for SSH access

Here's how you do it

It is NOT possible to import it with Horizon 'Import Key Pair' feature. Horizon will strip the EOL at the import, resulting in only 1 key.

You have to use the command line to import it in your project!

One public key per line.

And check that the keys were correctly imported:

Start a VM with the 'multiple-keys' key pair and check the console log.

Why does the SSH login not work?

You haven't configured the SSH keys

Here's how you do it

What is the username / password for my virtual machine?

Very similar to a Linux virtual machine, but you will need to login via RDP.

Here is a complete walk through

What are the rules in the "default" Security Group for? Can I delete them?

Under each of your OpenStack Projects, you will find a Security Group called default. Initially it will contain four rules that look like this:

What do these rules mean? Note that the rules come in pairs, one for IPv4 and one for IPv6—you generally want both.

The first pair are "egress" rules. They allow traffic from your instance to anywhere on the Internet.  This makes it possible for your instance to initiate connections to the outside.  This is necessary for things such as:

The second pair are "ingress" rules that allow all incoming traffic from other members of the same security group.  Thus, when you create several instances sharing this Security Group, they will have unlimited connectivity between each other—you won't need any specific rules to allow those internal communications.

Note that no other traffic is allowed by default. In particular, external hosts will not be able to connect to your instances unless you explicitly allow that by adding your own Security Groups/rules.

You may be tempted to remove these four default rules in order to improve security, but there are important caveats:

If you delete the egress rules altogether, your instances will take a long time to start up, because they won't be able to access the Metadata Service. They will also miss the information from that service. In particular, they won't be able to provision the trusted SSH public key for the default account. So unless you have configured SSH authorization in some other way, you won't be able to log in.

We mentioned a few other uses of the egress rules: Our standard images are configured to periodically check for and download software updates, which is considered a best practice for security reasons. They will also synchronize their system clocks using remote NTP servers. Without the egress rules that won't work.

Why does DNS name resolution not work?

How can I access my SWITCHdrive folder from a virtual machine?

Snapshot the VM via the Web Interface
With the command line tools. List the snapshots and get the ID of the snapshot you just created

Create an Image out of the Volume

Wait for image to become active, this takes some time, check with the command:

Ubuntu: Why can't I persistently change the hostname of my VM?

Because that information is reset on every reboot by default.

Learn how to turn that off

How can I modify the virtual hardware of a VM?

Create a Snapshot of the VM. Using this new volume, create a new VM with the desired hardware flavour. Remove the floating IP address from the old VM and give it to the new one.

How to deal with big Hadoop images

When using Tomcat, it may happen that it's starting very slowly. Tomcat internally uses the „SecureRandom“ random number generator.

How can I move a VM to a different region?

The Microsoft Windows Server 2012 template has per default some security settings enabled/disabled. These are:

There's a detailed description on how to start a Windows VM in the FAQ.

Here is a short description how to share a folder on your VM. It has to be mentioned that this is not recommended. It will open ports to your VM and allow hackers to attack your vm. So, if you open ports on the public interface, restrict these openings only to a few IP's, which are safe.

In your windows server vm:

Open Windows Explorer and change to your folder, which you want to share:

Be sure that the security settings of the folder allow all users to access this folder with the right permissions.